During his 30-year career at Utah State, Baker continuously taught fundamental courses in electrical engineering and physics. He was closely involved with developing aerospace instrumentation and conducting measurement programs utilizing more than 300 sounding rockets and over 25 satellites. The projects included instruments on five space shuttle flights. 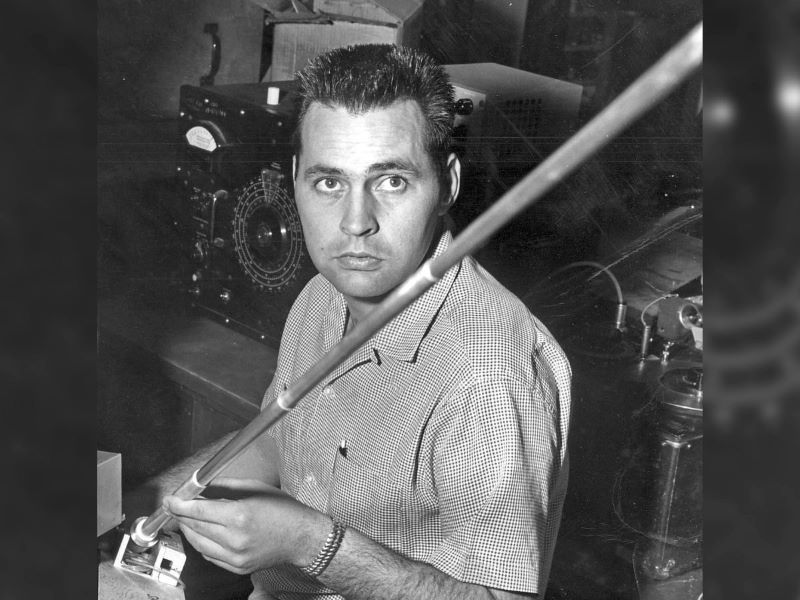 Space Dynamics Laboratory co-founder and USU College of Engineering leader Kay Baker is seen here with a component of an impedance probe used to take scientific measurements on a rocket travelling through the ionized regions during an aurora. Baker passed away on Monday, October 18, 2021.

“Kay was one of those unique individuals relatively few of us have the opportunity to know,” said Jed Hancock, president of SDL. “He combined thirst for scientific inquiry, engineering excellence and academic rigor for the benefit of humankind and was admired by all who met him for both his rich intelligence and kindhearted leadership. If not for the pioneering spirit of Kay and others like him, SDL would not be a national leader in cutting-edge research and development for NASA and the Department of Defense. The men and women of SDL will miss him greatly.”

Baker was a pioneer in the fields of atmospheric science and space engineering. During the early part of his career, the United States and the former Soviet Union were locked in a dangerous arms race, and both countries were testing nuclear weapons in the upper atmosphere. During that period, Baker was instrumental in researching the ionizing effects of nuclear detonations on the atmosphere.

In 1970, Baker and his colleagues, who made up The University of Utah’s Upper Air Research Laboratory (UARL), moved to Logan to set up shop at USU as the Space Science Laboratory. The lab was later renamed the Space Measurements Laboratory, or SML.

While at The University of Utah, Baker played a key role in the development of novel space-based techniques to measure atmospheric conditions. Baker and his team at the UARL developed the Standing Wave Impedance Probe, which could directly measure the local electron density. The instrument was used on 72 payloads, including 17 satellite systems.

At USU, he joined forces with his brother Doran, a faculty member at USU and director of the school’s Electro Dynamics Laboratories (EDL). The SML’s physics-oriented and rocket payload work and EDL’s instrument development work were naturally synergistic and complementary programs. After atmospheric testing of nuclear weapons was prohibited by international treaty, the Baker brothers and their growing team of colleagues at USU began studying the effects of ionizing radiation on the atmosphere by studying the aurora borealis.

Through the 1970s, SML and EDL launched many first-of-a-kind instruments on atmospheric sounding rockets that yielded many contributions to atmospheric science. In July 1982, the two laboratories merged to create what is now known as the Space Dynamics Laboratory.

During the 1980s, the development of the International Space Station was well underway. However, mission planners needed to understand better how large orbiting structures would interact with the ionosphere. NASA turned to Baker to find a way to determine if space-based systems such as the space station could become electrically charged and therefore pose a threat to astronauts during spacewalks. Baker and co-investigators developed a space-based instrument that did just that. The Vehicle Charging and Potential instrument flew in the cargo bay of the third space shuttle flight and was USU’s first shuttle payload.

Baker was a dedicated teacher as well as a pioneer in space measurements and research. He was appointed to several vital positions at USU, including head of the Electrical Engineering Department, tenured professor of electrical engineering, professor of physics and director of the Center for Research in Aeronomy.