News Release — April 19, 2022 — Utah State University electrical engineering students make-up one of eight teams advancing to the final round of this year’s International Future Energy Challenge hosted by the Institute of Electrical and Electronics Engineers. 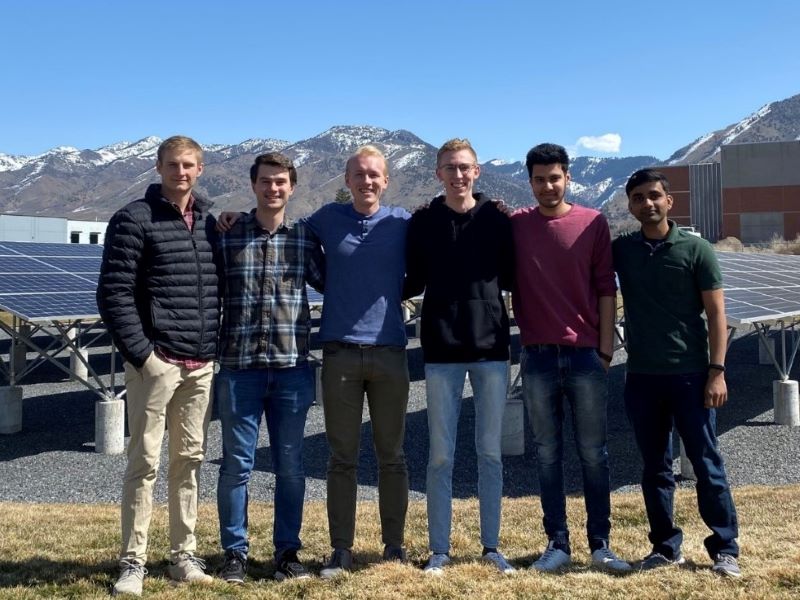 A group of USU students (from left to right: Tucker Skinner, Mckay Waite, Conner Sabin, Dakota Goodrich, Sanat Poddar, and Aditya Zade) is one of eight teams competing in the final round of this year’s International Future Energy Challenge hosted by the Institute of Electrical and Electronics Engineers.

Each year, students from across the globe participate in this competition to design and build real-world solutions. This year’s final product is a smart solar microgrid inverter, a device necessary for the power grid to use the renewable energy harnessed by solar panels. Tucker Skinner, Mckay Waite, Conner Sabin and Dakota Goodrich have been working on their entry since last year, advancing through the three initial competition rounds.

Their faculty mentor is Hongjie Wang, an assistant professor of electrical and computer engineering. Aditya Zade and Sanat Poddar, both Ph.D. candidates, are serving as team mentors.

The inverter is designed to operate at 1 kW while achieving 95% efficiency. High power density, system efficiency, and the ability to support the grid during peak conditions are major characteristics of the undergraduate team’s design. Their innovative design can be mass-produced for less than $200 per unit, lowering the cost of energy and advancing the adoption of renewable energy usage.

“All teams have the same topic,” Skinner said. “The judges are looking at who has the best design and the highest probability of actually building it and making it work.”

The final competition will be July 27-29 at The University of Tennessee Knoxville, where the winning team will bring home $10,000. Between now and then, the team will complete their design, order components for the project, complete the coding portion, build the hardware, and test what they have made.

“It feels quite satisfying because we have put in a lot of hours,” Skinner said. “All of us came into this competition with limited knowledge and we’ve learned a ton since.”

Skinner said working with hardware is one of the most valuable parts of the competition for his team.

“Not many undergraduates get hardware experience,” Skinner said. “We’re doing a lot of hands-on stuff, and that’s very exciting.”