News Release — Mar. 1, 2021 — Faculty, students, and other water enthusiasts enjoyed a conversation with Gene Shawcroft, Utah’s newly appointed representative to the Upper Colorado River Commission. The virtual event took place Feb. 25 and was hosted by the College of Engineering and the Utah Water Research Laboratory. 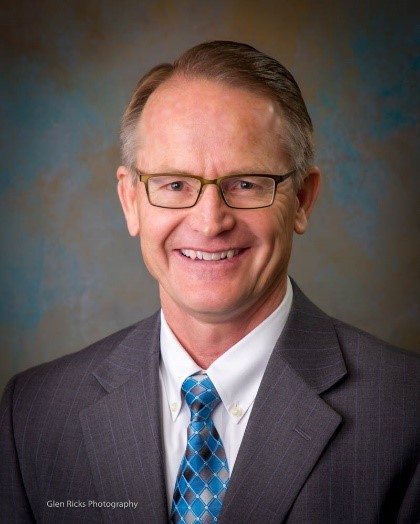 Gene Shawcroft was recently appointed to represent Utah in the Upper Colorado River Commissions, an interstate agency that oversees the allocation of the river’s water to Wyoming, Utah, Colorado and New Mexico.

Shawcroft was appointed to the UCRC in January, one of four other state commissioners and a federal appointee who oversee the allocation of the Colorado River’s water to Utah, Wyoming, Colorado, and New Mexico. Like the other commissioners, Shawcroft has had a long career in water management. Since 1991, he has worked in numerous roles for the Central Utah Water Conservancy District, which aims to deliver clean, usable water to customer across eight counties. In 2015, he became its general manager.

Shawcroft spoke on a number of topics, including the history of the Upper Colorado Commission, upcoming negotiations of the commission’s 2007 guidelines, Lake Powell operations, basin drought, and drought contingency planning.

“I really appreciated the fluency with which Gene discussed so many important Colorado River topics,” said David Rosenberg, professor of civil and environmental engineering. Rosenberg facilitated the event. “It was also very educational to hear about the system of reservoirs, diversions, tunnels, and exchanges that the Central Utah Water Conservancy District uses to collect water in the headwaters of the Colorado River basin on the eastern side of the Wasatch Mountain and move the water west under the mountains to the Wasatch Front for use by Orem, Provo, and cities further north.”

Mahmud Aveek, a master’s student in civil engineering, already knew a bit about the Colorado River’s history but was particularly interested in Shawcroft’s thoughts about the Lake Powell Pipeline.

“I understood from the discussion that Utah is doing a tremendous job to conserve water, but mostly by constructing new infrastructures. Mr. Shawcroft mentioned that by lining the delivery canals, Utah saves almost 140,000 acre-ft per year, nearly 250 gallons/ day,” he said. “I liked what Mr. Shawcroft requested from the research community – ‘to make people realize how valuable water is.’”

Shawcroft ended his remarks with another request from the research community: greater communication between university researchers and water managers in the field.

“I think the more we can communicate, the better off we're going to be. That is how we can marry these two very intelligent systems: the hands-on, the day-to-day, the operational, and the theoretical and academic.”