Another undergraduate student project from Utah State University is on its way to space. 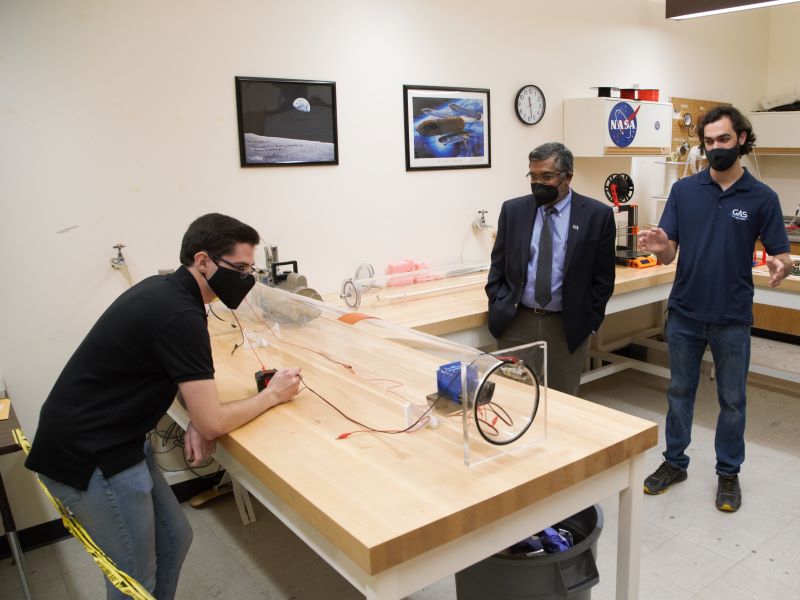 Two members of the USU Get Away Special team, Jack Danos and Carter Page, demonstrate their most recent project for College of Engineering faculty members, including Dean Jagath Kaluarachchi. (Danielle Roth/USU)

This week, after more than eight years of work, members of the Utah State University Get Away Special team are delivering their recently completed CubeSat satellite to Houston, Texas. The project is part of NASA’s CubeSat Launch Initiative.

The primary goal of the USU project is to have the satellite deploy a meter-long inflatable boom and then send a picture of the inflated boom back to Earth. The boom is made out of woven fiberglass and will travel to space compacted within the satellite. Once in space, the boom will expand and fill with air. In this application, the boom will be used to stabilize the satellite. In the future, this method could be used to build structures in space.

Jack Danos is a senior in the mechanical and aerospace engineering department and is the project coordinator.

“In an orbit without this boom and without any other stabilization devices, the satellite would kind of just slowly spin wherever it wanted to spin,” Danos said. “This boom will cause a little bit of drag on the satellite and make it fly a lot like an arrow does.”

Danos will be traveling to Texas on Tuesday with mechanical engineering sophomore Carter Page who is the mechanical team lead for the project and Jan Sojka, the head of the USU physics department and faculty advisor for the team.

The team is working with the aerospace company Nanoracks to deploy their satellite from the International Space Station. Once delivered to Houston, Nanoracks will prepare the satellite to be deployed and then hand the project off to NASA. The NASA launch for the project is scheduled for Dec. 1.

Once the satellite arrives at the International Space Station, it will be launched into orbit around the Earth. Unlike other projects that remain attached to the space station, this project will orbit separately from the station. The team anticipates their satellite will orbit the Earth for about a year before it burns up.

The Get Away Special team at USU has been sending student projects into space since 1976. Although the team is officially housed in the physics department at Utah State, students from a variety of academic backgrounds make up the team. According to Danos, about 25-30 students are a part of the team each year.