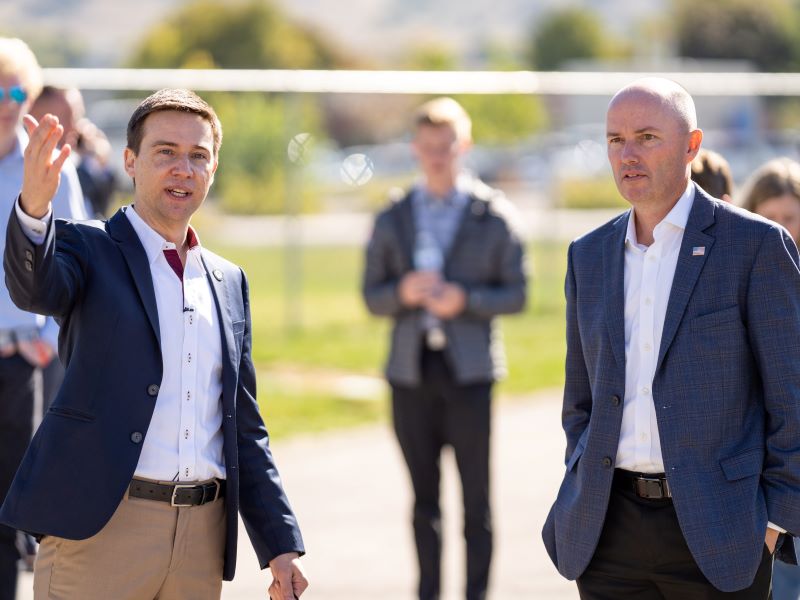 ASPIRE center director Regan Zane hosted the governor and several of his cabinet members during their visit to the facility. The group learned how ASPIRE develops solutions for the widespread electrification of all vehicles.

The ASPIRE Engineering Research Center was funded in 2020 by the National Science Foundation and will receive $25 million over 5 years.

During the visit, Gov. Cox and a few members of his cabinet experienced firsthand the technologies that are at the forefront of accomplishing ASPIRE’s objectives. The group rode around the ASPIRE test track on the electric Aggie Bus that is charged wirelessly while in motion; watched an electric Toyota RAV4 charge wirelessly as it drove on the track; and inspected an electric Kenworth semi-truck that is being retrofitted by ASPIRE to be charged wirelessly with technology from ASPIRE partner ElectReon.

ASPIRE is also working on megawatt-scale high-power stationary wireless charging and smart charge management systems that balance energy from renewable sources such as solar power and local energy storage with the high-power demands of passengers through heavy-duty vehicle charging. The technology provides the energy needed to charge large vehicles like semi-trucks in less than half an hour. The projects are being completed in collaboration with several of the center’s industry members, including Rocky Mountain Power, the Utah Transit Authority and WAVE.

A combination of these technological advances is being deployed and evaluated as part of a pilot project with the Utah Inland Port Authority being developed in Salt Lake County. In the 2021 Utah Legislative Session, the State of Utah appropriated $5 million to ASPIRE and $15 million to the ASPIRE and Inland Port partnership to build out an early pilot program of this technology here in Utah. These technologies will help reduce emissions and the negative effects of air pollution on the surrounding communities.

Use of these technologies in projects like the Inland Port is receiving bipartisan support in Utah because of the potential for balancing the health of the state’s residents while also stimulating economic growth.

In addition to Utah, pilot projects of dynamic wireless charging technology in the United States have been announced in Florida, Indiana, and, most recently, in Michigan.