October 4, 2021 — A former Utah State University College of Engineering professor, Roland Jeppson, died on Sept. 29 at age 88. He will be deeply missed by the Aggie community.

Jeppson began his journey at USU in the 1950s when the school was still the Utah State Agricultural College. He graduated with a bachelor’s degree in 1957 and a master’s degree in 1959, both in civil and environmental engineering. Following his graduation, he took a position at the school as a research engineer. 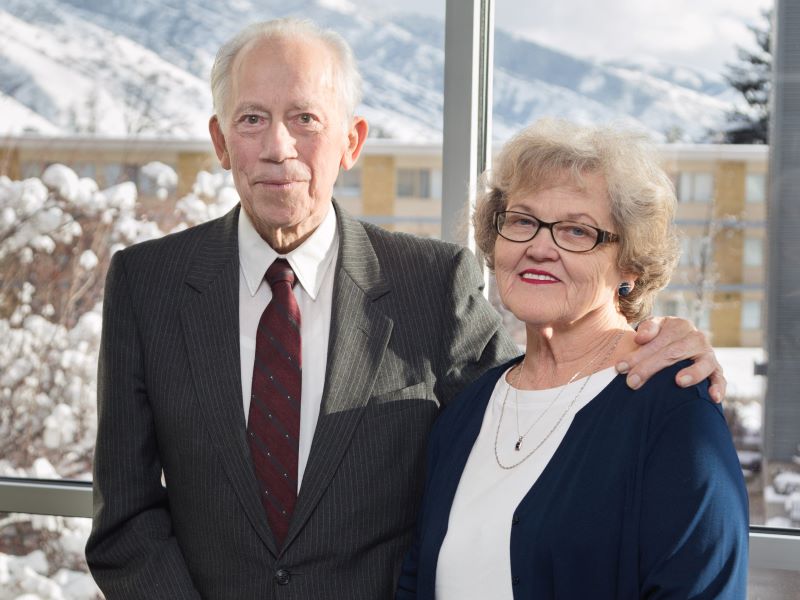 The late Roland and Mary Anna Jeppson stand together for a portrait in 2017 on the campus of Utah State University. Roland Jeppson, a former USU engineering professor, passed away at age 88 on Sept. 29. (Matt Jensen/USU)

In the ‘60s, Jeppson moved to northern California to become an engineering faculty member at Humboldt State University. While working at Humboldt he taught most of the engineering classes and was instrumental in developing the school’s engineering program.

From Humbodlt Jeppson went to Stanford University where he received a faculty fellowship that paid his tuition and an academic salary. He earned his PhD in civil and environmental engineering from Stanford.

After his time at Standrod, Jeppson came back to Cache Valley to teach and research at USU for the rest of his professional career. He continued to teach engineering courses at the university long after his retirement. His research led to the development of a pipe network analysis system that is used throughout the world.

In lieu of flowers, his family asks donations be made to the Roland and Mary Anna Jeppson Endowment Scholarship in Engineering Fund at USU.

Memories and condolences can be shared on the online obituary found here.