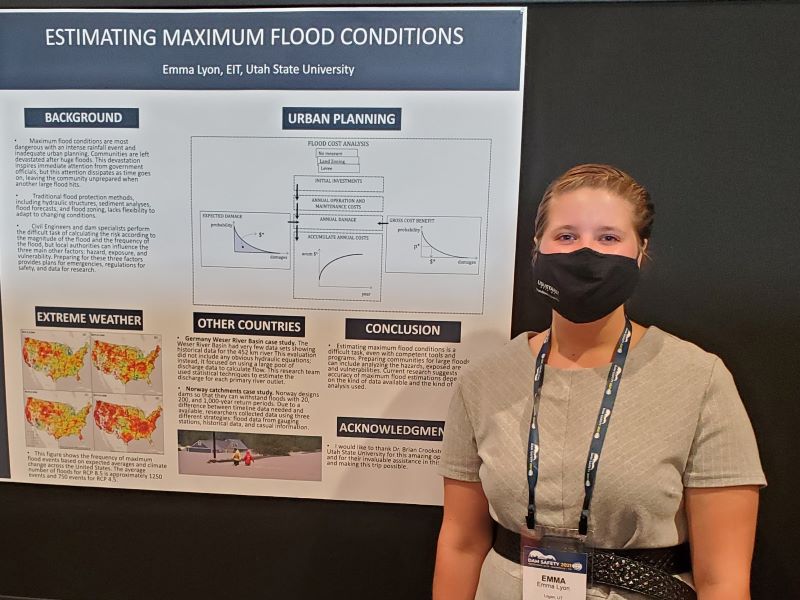 Emma Lyon stands with her poster at the Association of State Dam Safety Officials in Nashville, Tennessee. (Courtesy of Brian Crookston/USU)

Emma Lyon and Caitlin Arnold attended the conference earlier this month. Lyon presented her research about what communities can do to prepare for hundred-year floods.

“Some places say, we are just going to build one big structure and it’s going to solve all the problems,” Lyon said. “But actually, many smaller efforts often make the bigger difference.”

Lyon’s work looked at how communities can predict the size of large floods by performing in-depth tracking of current river levels and by considering other environmental factors, like the effects of global warming. She said this is especially helpful in situations where historic flood data is limited.

“The other thing I found out is when people see the direct results of a flood, it’s on their minds,” she said. “But after everything is back to normal, we lose funding or interest in finding solutions for floods. And so then you aren’t prepared for when the next one comes.” 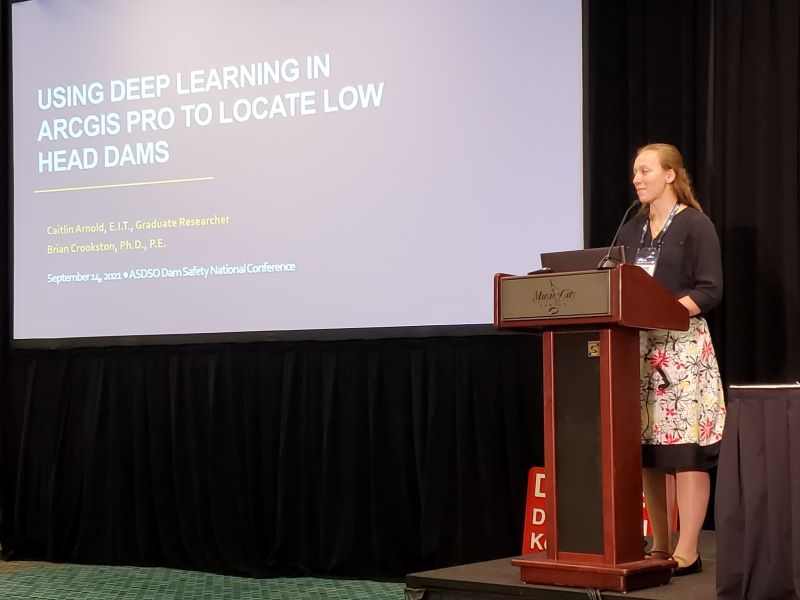 Caitlin Arnold presents her research at the Association of State Dam Safety Officials in Nashville, Tennessee. (Courtesy of Brian Crookston/USU)

Arnold’s presentation was entitled “Using Deep Learning in ArcGIS Pro to Locate Low-Head Dams.” Low-head dams span the width of a river channel and the water that flows over them only drops 1 to 15 feet. The problem with low-head dams is that, while there are a high number of drowning hazards just downstream of them, the locations of many of the dams are unknown.

Arnold’s work will help with efforts to locate the dams by allowing images of entire states to be scanned for low-head dams. Because it is easier to confirm the presence of a dam in person, areas of concern identified on the scans can be further examined by on-the-ground teams.

Many of the conference attendees were very excited about Arnold’s research.

“I’ve had four different people reach out to me since to get some portion of the code that I have written to do this, or to get my final model because they want to do something similar,” she said. “It was just super rewarding.”

This was the first conference Lyon and Arnold had attended and they each said they loved their experience.

“Everybody was super passionate about what they were there for,” Lyon said. “That was really impressive to me. I don’t know if that is what I am going to do for my career, go into dam safety, but I do know that I want to find something that makes me just as excited as these people get about protocol and design and all the little details.”