A Seismic Shift in Earthquake Engineering

Oct. 7, 2021— More than 1,000 miles from his hometown in Utah’s coal country, Professor Brady Cox takes aim and heaves a massive sledge hammer onto the ground with deafening force. Like his coal miner father before him, Cox swings away at the Earth, not into the red-rock mines of Carbon County but into the spongy turfgrass at an upscale community near Austin, Texas. With his safety-vested colleagues gathered around, he makes a subtle observation. “I haven’t strayed too far from my coal mining heritage,” he says with a laugh, resting the heavy hammer on his shoulder. 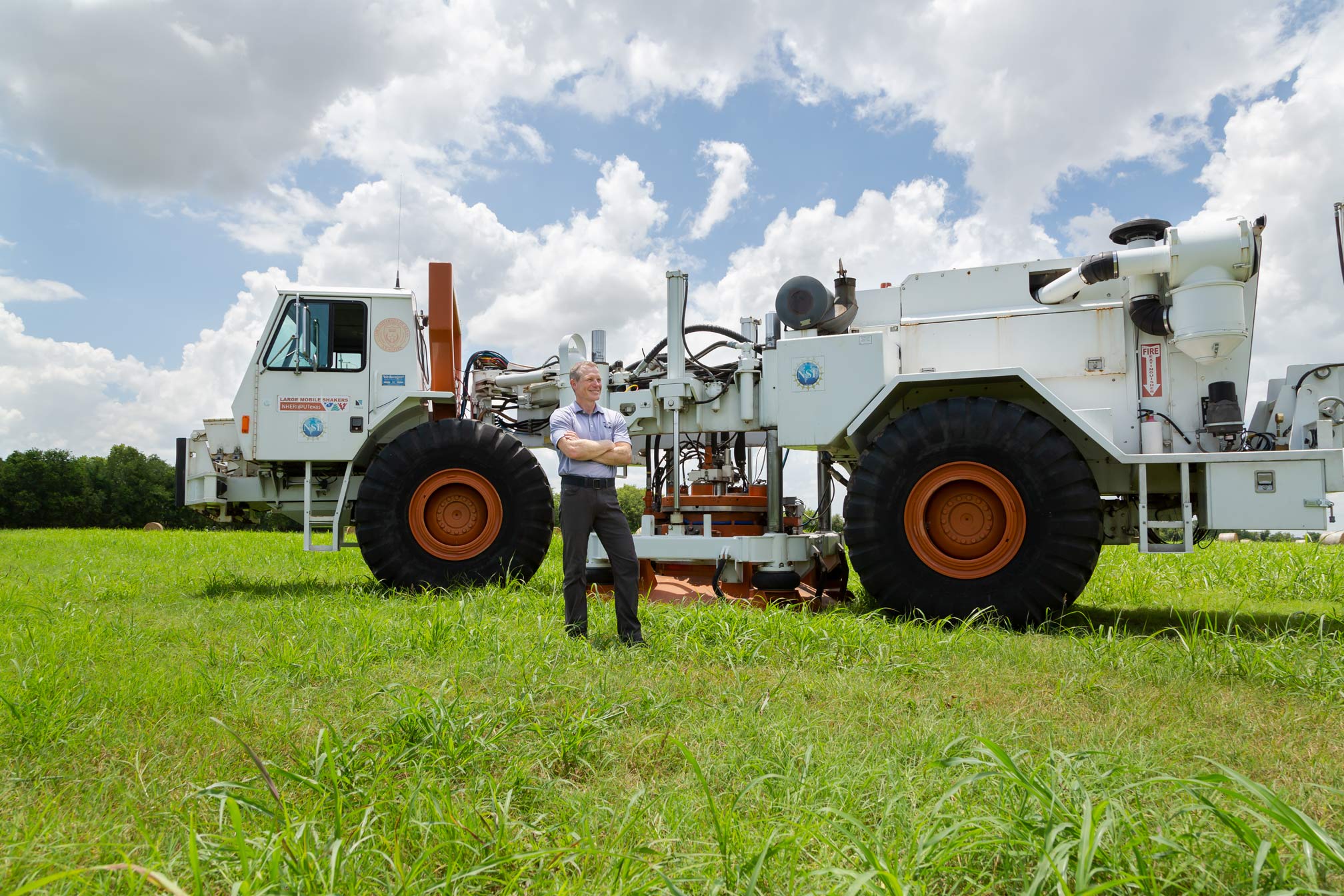 Dr. Brady Cox has travelled the globe with T-Rex, a 64,000-pound shaker truck that simulates seismic waves. T-Rex is an invaluable tool for earthquake engineering, but Cox is also pioneering new ideas for understanding big tremors.

Seeing Beneath the Surface

Cox and his team are in Austin conducting a study for the Texas Department of Transportation. Authorities fear a large void has formed below a busy expressway, and Cox was brought in to peer beneath the surface without disrupting traffic. Standing a few yards from the roadway, he swings the hammer onto an aluminum block resting on the ground. Each blow sends a shockwave through the Earth, triggering a network of sensors on the surface. After 300 swings at strategic locations, the sensor data begin to paint a picture of the subsurface. While the goal is to detect an underground void, the same method can be used to study the effects of earthquakes. By measuring the thickness and strength of each subsurface layer, engineers can predict how a particular parcel of land will behave in an earthquake. “The soil is like a musical instrument that resonates when its string is plucked,” says Cox. “We want to know what note the ground is going to play when an earthquake strikes. Similarly, buildings resonate at a certain frequency when the ground moves; however, we don’t want the ground and building to resonate at the same frequency. That can lead to catastrophic damage.” Cox has performed this subsurface imaging work all over the world. He compares it to an ultrasound. “When we go to the doctor, we prefer less invasive methods to see inside our bodies rather than surgery. The same is true for earthquake engineering. We can use non-intrusive methods to see beneath the surface — even thousands of feet deep.” Cox is internationally renowned for his work in non-invasive soil characterization. In 2012, President Barack Obama awarded him the Presidential Early Career Award for Scientists and Engineers, solidifying his reputation as one of the nation’s top experts in earthquake engineering.

A Growing Need in Utah 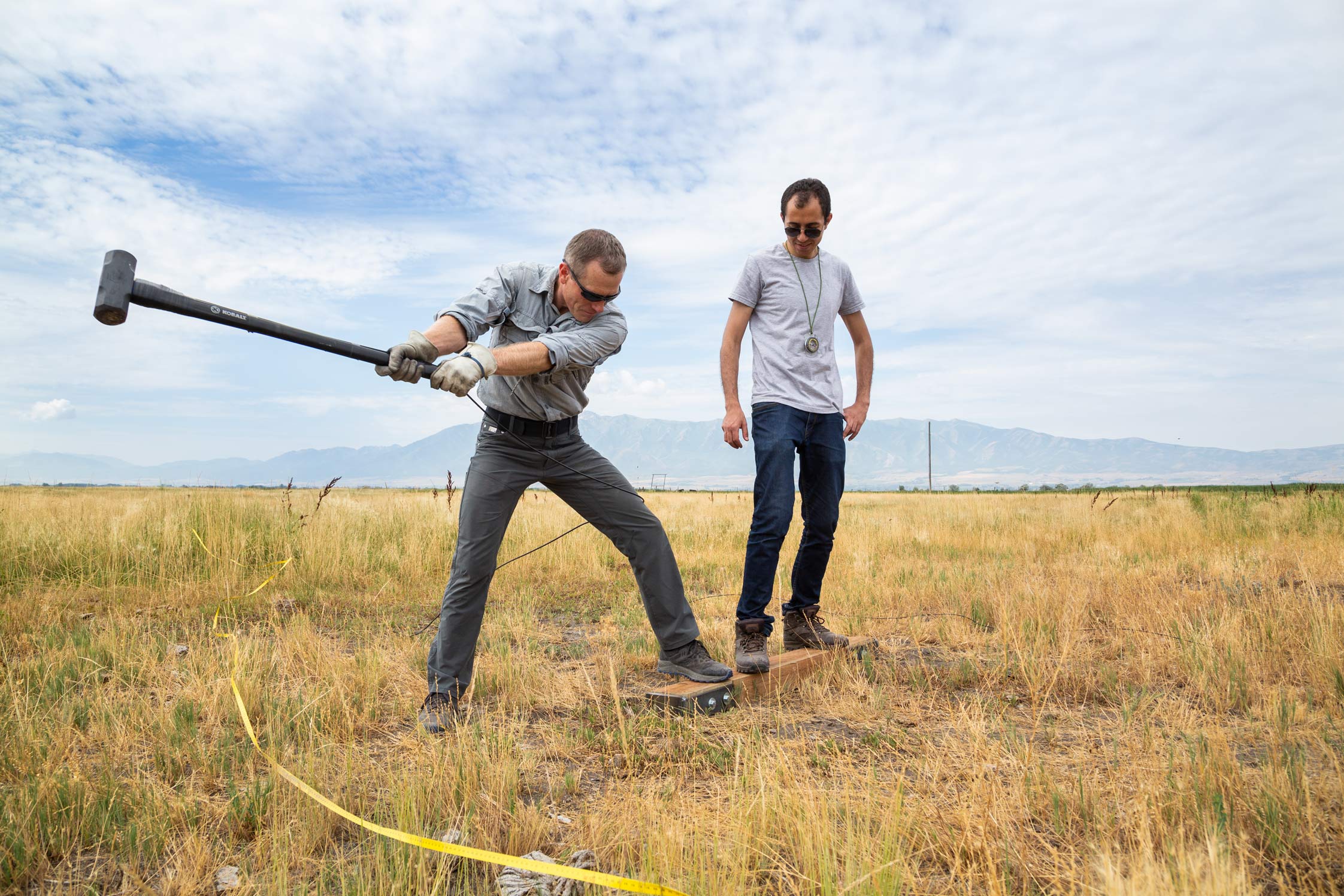 Cox is originally from Helper, Utah and is an USU alumnus. Before returning to Logan, he taught at the University of Arkansas and most recently at The University of Texas at Austin. While preparing to move his family to Logan, a 5.7 magnitude earthquake rattled Magna and the Salt Lake Valley. It was ironic timing for an earthquake engineer. “Utah is my home. I love this place; but there is significant seismic hazard here.” Cox has traveled the globe in search of clues for building a more earthquake-resistant society. From Haiti to New Zealand to Turkey, he’s witnessed the devastating effects of major tremors. “When you see the devastation from a big earthquake, it changes your perspective. I don’t want to see what happened in Turkey or Peru to happen in Utah. We can avoid catastrophic loss of life, and it all comes down to a better understanding of earthquake engineering.” Utah has a legacy of seismic monitoring, but Cox says there remains a critical need to develop improved engineering design criteria that better serves Utah’s mixed terrain. To help state leaders plan for the big one, Cox is developing a new research program that combines geotechnical, structural and earthquake engineering. “Utah is the most seismically hazardous state in the nation without a dedicated earthquake engineering center. I hope to change that soon by bringing one to USU.”

The Future is Fiber Optics

To do their job, earthquake engineers need earthquakes. But the real tremors we see on the news are impossible to predict and far and few between. To fill the gaps, Cox uses a 64,000-pound shaker truck nicknamed T-Rex to simulates seismic waves. Cox and T-Rex have been around the world, and the machine has been invaluable to his research. But times and technology are changing, and Cox is pioneering new ideas for simulating and understanding earthquakes. Instead of whacking the ground with a hammer or shaking the soil with T-Rex, Cox is monitoring earthquakes with fiber optics. “We can use existing fiber optic networks to measure seismic activity throughout an entire city 24 hours a day. That’s way better than placing dozens of sensors in the ground to measure just a few hundred feet of land. He tells his students the future of the profession will depend more on supercomputers than on machines like T-Rex. He encourages undergraduates to learn coding languages and have good math skills. “It’s an exciting time to do this work, and the demand for engineers in this area is rising. Across the country, we’re starting to replace our infrastructure. Earthquake engineers will be a vital part of our future world.”