MAE Alumna Leads One of the Largest Aviation Maintenance Program in the U.S. Air Force

Oct. 7, 2021 — When Sandra Fitzgerald started her career as a journeyman engineer at Hill Air Force Base, the sound of the ringing telephone often made her feel a little nervous. It was 1988. Fitzgerald was a brand-new landing gear systems engineer at one of the largest military installations in the country. In that unfamiliar environment and with a lack of experience typical of any recent college grad, her technical confidence just wasn’t there.

Fast forward a few years and the insecurity is long gone. Thinking back on those early days, she can’t help but laugh at her timid beginnings. Today, Fitzgerald is one of the most recognized and respected leaders at the base. She holds a long list of accomplishments and leadership positions, including her current role as Deputy Group Director of the 309th Aircraft Maintenance Group. She is responsible for more than 2,200 employees, seven squadrons, 46 on-site facilities supporting the A-10, C-130, F-16, F-35, F-22 and T-38 airframes. As head of one of the largest deopt maintenance operation in the Air Force, Fitzgerald oversees repair, overhaul and modification programs for hundreds of aircraft each year. Looking after all those planes and the people who work on them is a monumental task. 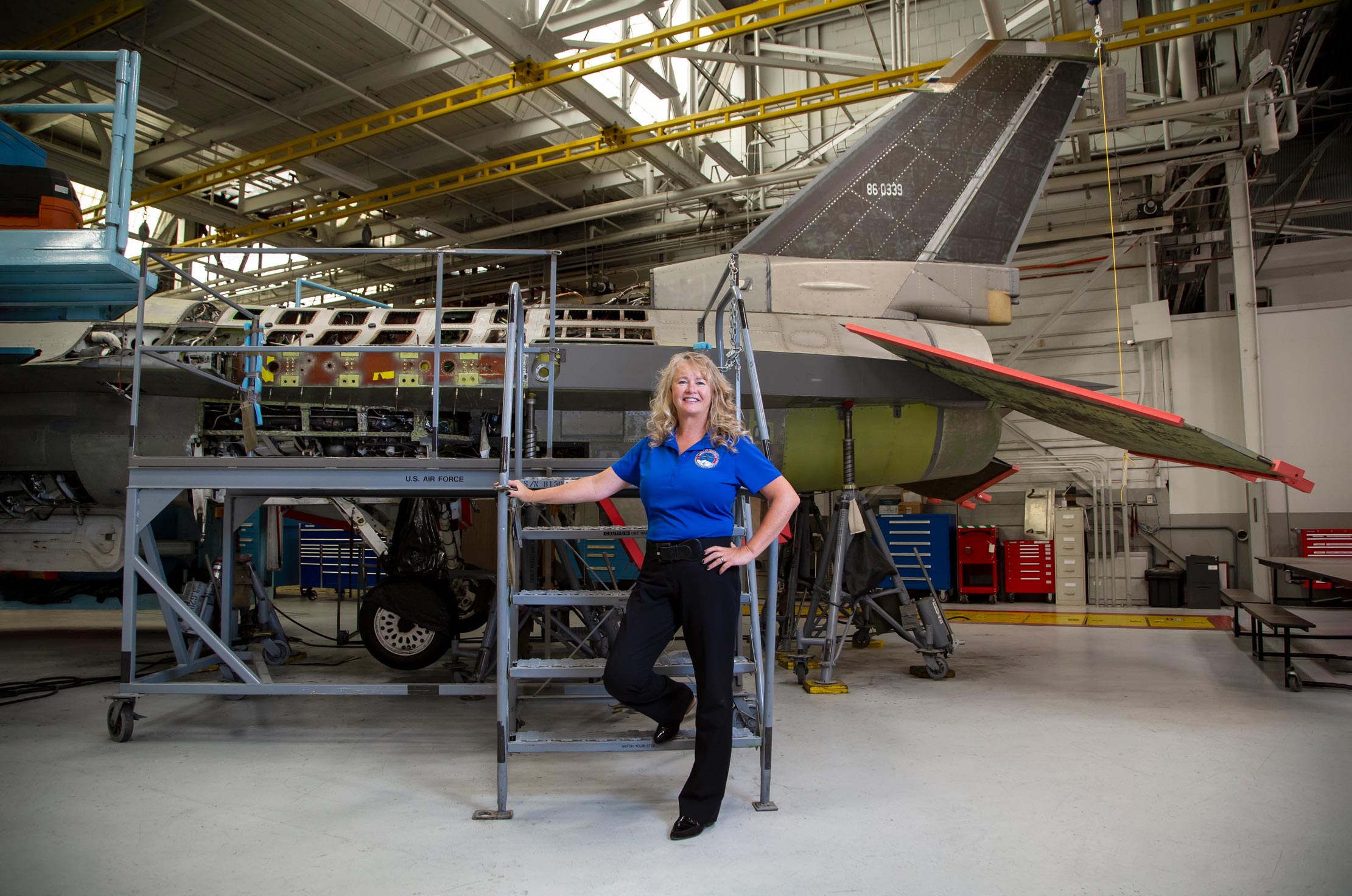 MAE alumna Sandra Fitzgerald is the Deputy Group Director of the 309th Aircraft Maintenance Group at Hill Air Force Base.

“The modification and sustainment work we do, to a large degree is work that no one else in the world does or can do,” she said. “Our professionals are challenged with performing modifications, identifying defects and performing repairs that keep our aircraft fleets viable and ready for the next flight.”

In August, Fitzgerald gave the College of Engineering a behind-the-scenes tour of Hangar 225, Hill’s iconic twin hangar complex that houses row after row of F-16, F-35, A-10, and the behemoth C-130 cargo aircraft. The setting resembles a scene from Star Wars. Aircraft line up nose to tail in maintenance bays, each secured on jack stands to allow technicians in tethered safety harnesses to safely walk along the fuselage and wings to perform inspection and repairs.

“We do everything from installing new wiring and avionics to completely removing and replacing the structural bulkheads of the aircraft,” she said, lifting a piece of bulkhead that was recently pulled from an F-16 fighter plane. At a nearby station, she checks in on a sheet metal technician who is overhauling a jet that has been stripped down to its bare frame. A whiteboard at each bay helps technicians track their progress. Every hour of labor, every dollar spent is recorded and plotted on a graph pinned to the board. The work never slows down, and even when the pandemic brought much of the economy to a standstill, Fitzgerald’s team delivered 92 percent of their scheduled workload. “This year we will complete about 1.41 million hours of workload and 198 aircraft. Our goal is to meet both a timeline requirement and produce a quality product for the warfighter.” 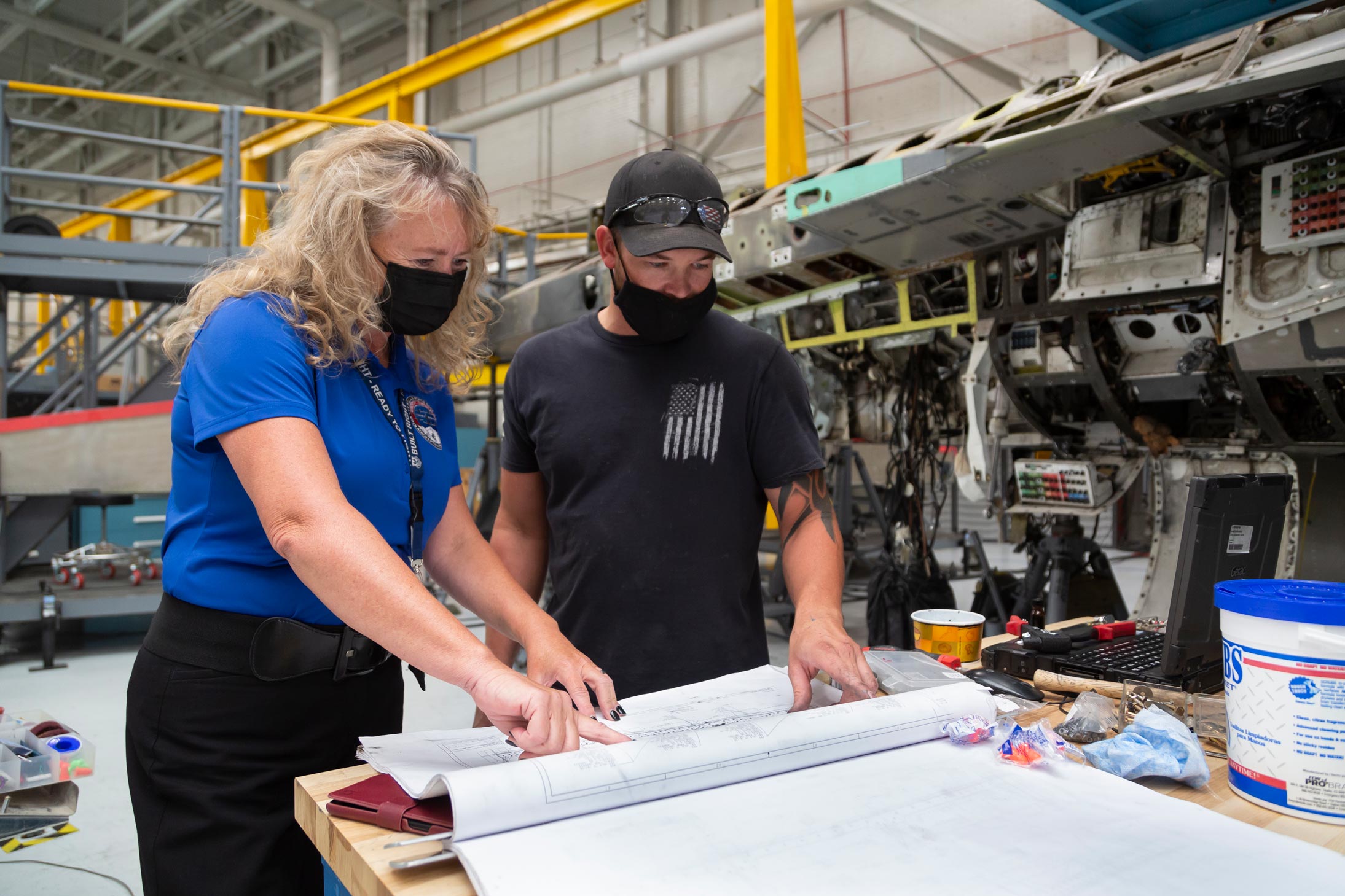 We exit through the giant hangar doors and walk onto the tarmac. Fitzgerald quickens her pace to get a better view of the airfield. A squadron of F-35 jets is slowly taxing toward runway 14-32. It’s a rare site to see 12 of the fighter planes lined up in one location. Personnel and visitors gather around to see the aircraft in formation. Fitzgerald wants a better angle, so we jump into her government-issued Ford Escape and drive eastward for an unobstructed view of the runway. She watches the departing jets, eager to point out their signature shock diamonds visible in the exhaust plume against a hazy afternoon sky. The unmistakable rumble from the jet’s engine rattles the ground beneath us. It’s a moment of reflection for Fitzgerald on what is otherwise a very normal day. “What we do matters,” she said. “This is what it’s all about.”

She’s quick to mention that her mechanical engineering degree helped her reach this stage in her career. “My degree allowed me to do real engineering,” she explained. “Because of my training at USU, I was able to start my career as a landing gear engineer, acquire the skills and knowledge to lead and be part of this great team. I truly love this job!”