Published in Utah State Engineer — Oct. 25 2018 — We live in an on-demand society. At the push of a button, we have access to entertainment, technology and information. Now, an aerospace engineer trained at USU is pioneering the next generation of unmanned aerial systems that can be deployed at a moment’s notice. The new platform could revolutionize airborne military tactics.

Nick Alley is the CEO and founder of Area-I — a company that’s rewriting the textbook on small unmanned aerial vehicles. The company is just nine years old and already has 40 employees and multi-million dollar contracts with the U.S. Army and NASA, among others.

“I knew in November 2011 when we got our first air-launched unmanned-aerial-system contract that it was going to be a big deal,” said Alley from his office in Kennesaw, Ga., about 30 miles northwest of Atlanta. 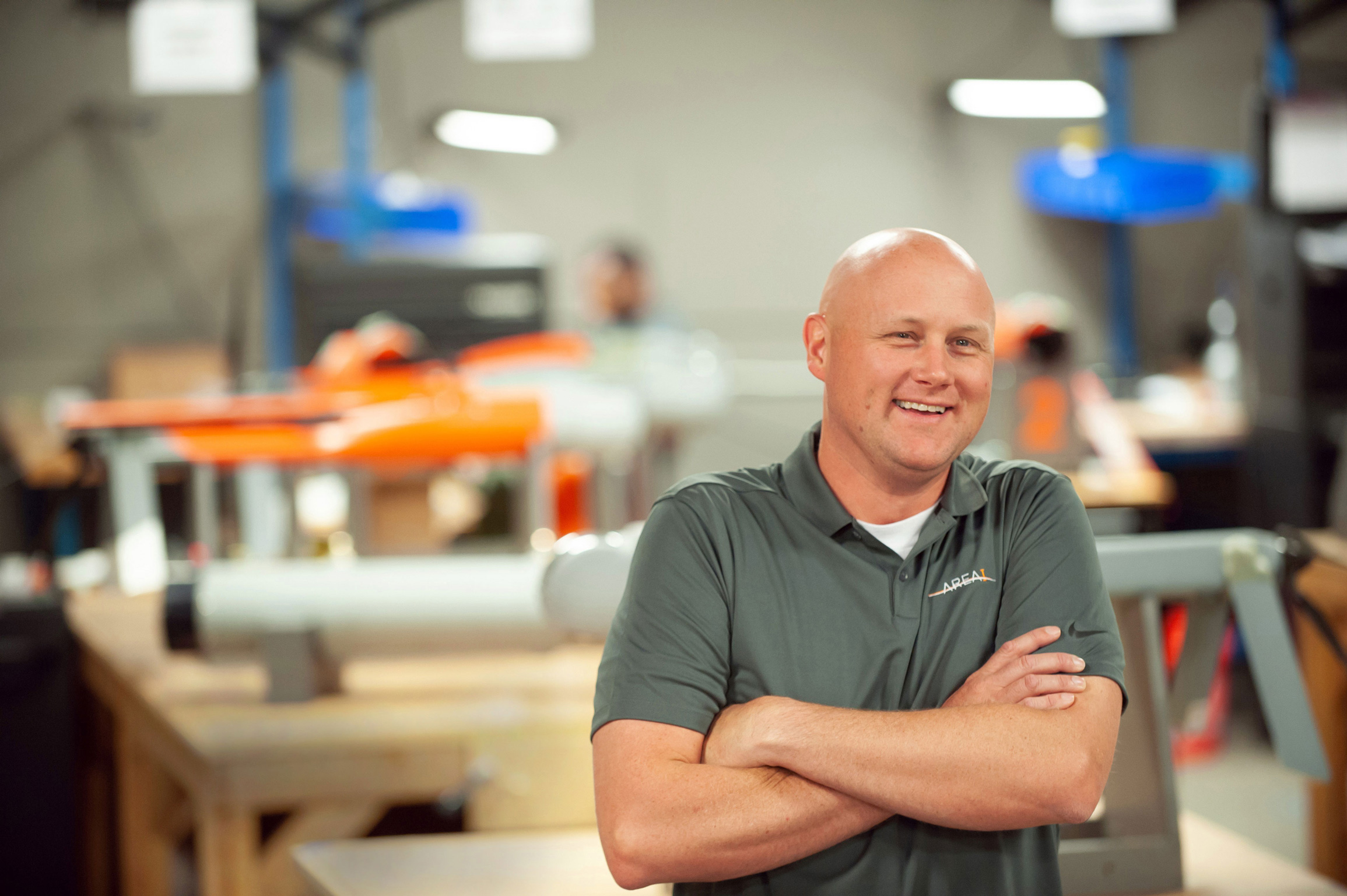 Nick Alley: Founder and CEO of Area-I, received his bachelor’s, master’s and PhD in mechanical engineering and is a die-hard Aggie basketball fan.

Growing up in Utah, Alley dreamed of becoming a commercial airline pilot. But after an encounter with a disgruntled airline captain on a layover, the future engineer had a change of heart.

“Talking with that pilot changed my mind about my career goals,” he recalled. “The turning point was a short time later when I met with my future academic advisor Kathy Bayn. She told me if I went into mechanical and aerospace engineering, I could design airplanes.”

A few years later, the fledgling aerospace engineer was in graduate school working alongside USU’s top aerospace faculty including Warren Phillips, Bob Spall, Clair Batty and Frank Redd. Alley became a teaching assistant and advisor on the USU Wright Flyer — a functional replica of the Wright brothers’ airplane built in 2003 by USU and the Space Dynamics Lab to commemorate 100 years of aviation. Alley says his experience in the classroom and aeronautics labs left a lasting impression.

“I loved my education at USU,” he added. “I loved Logan and the friends I made there and the students who I worked with. There was an incredibly talented and experienced group of faculty there. We were always challenged to learn the material and learn it well.”

Alley graduated with a PhD from USU in 2006 and worked shortly for Idaho National Lab and later as a research professor at Georgia Tech where he taught flight mechanics. The teaching experience gave him a broader appreciation for USU. “The teaching I saw at Georgia Tech was nothing like what I experienced at USU,” he said. “In Georgia it was more about research and money. At USU, it seemed like the faculty cared about teaching. USU was a great environment and a great place to go to school.”

Alley moved to Georgia in 2007 and by 2009 had incorporated his new business. In April of that year the company landed its first big government contract. Today, Area-I is known as a leader in tube-launched unmanned aerial systems. Alley says the tube concept is one of the most effective methods for deploying UAVs on the battlefield or for use in tactical surveillance.

“The tube-launched concept offers UAS on demand,” he said. “They can be stored for long periods of time, and then deployed from a manned aircraft. They offer a much-needed supporting role. Before our company came along, there were no good tube-launched aircraft that had any decent amount of endurance. When we started, our nearest competitor could carry a pound or two of payload for 45 minutes. We carry five pounds of payload for up to four hours. We’re out-flying multi-billion dollar companies.”

Alley credits parts of his success to his USU experience.

“Utah State has the best engineering program in the state,” he added. “I built this company based largely on what I learned at USU. I think that says a lot about the education I got at USU.”