The transportation sector accounts for approximately 40% of U.S. energy use and is a major contributor to pollution, particularly in urban areas. Electric drive technologies offer a path towards zero "tail-pipe" emissions and significant improvements in overall efficiency. However, major challenges still exist that have limited market penetration of electric drive systems in transportation to less than a few percent. We are pursuing research in modeling, design and control of power converters associated with the electric drivetrain in order to improve vehicle performance, range, and lifetime and reduce cost and weight.

To achieve these objectives, we have joined forces with a multi-disciplinary team at the University of Colorado at Boulder and Colorado Springs, a team at the National Renewable Energy Laboratory (NREL) and the Ford Motor Company. Funding has also been secured through the United States Department of Energy’s Advanced Research Projects (ARPA-E) through 2015. 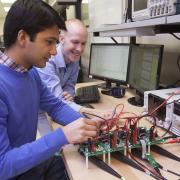 “No two battery cells are alike--they differ over their life-times in terms of charge and discharge rates, capacity, and temperature characteristics, among other things. Traditionally, these issues have been managed by matching similarly performing cells at the factory level and conservative design and operation of battery packs, but this is an incomplete solution, leading to costly batching of cells and overdesign of battery packs.” (read the full publication)

Our team is focused primarily on system hardware design, including design and control of bi-directional cell-level power converters and full system battery pack assembly and evaluation. Along with newly developed physics based battery models and model-predictive battery control algorithms, we will be able to operate individual cells in large battery packs up to their physical limits. These control methods utilize dynamic cell information to achieve battery performance closer to theoretical limits by generating highly accurate cell models and using predictive control to anticipate changing dynamics and optimally shape current profiles. This will yield improved performance (especially at low temperatures) and actively balance all cells so that they will degrade uniformly to the end of their life. These capabilities have the potential to significantly reduce initial battery pack cost and weight and increase the value of the battery pack for second use applications.

The modular architecture, which achieves continuous balancing of all cells, can be used with an arbitrary number of cells in series, requires no control communications between converters, and naturally shares the auxiliary load current according to the relative state-of-charge (SOC) and capacities of the battery cells.

Recently we demonstrated this cell balancing system with a string of four series-connected 3.6Ah NMC battery cells, with combined outputs rated to supply a 12 V 35 W auxiliary load. Each battery was partially charged to different levels of state-of-charge before being connected into the system, representative of a battery pack with mismatched cells. The system performed as expected, automatically balancing each cell until they were sharing the load equally.