Aug. 9, 2018 — USU’s Darcie Christensen is one of 31 engineering students nationwide — and the only person in Utah — to receive a 2018–19 Tau Beta Pi Honor Society academic fellowship. 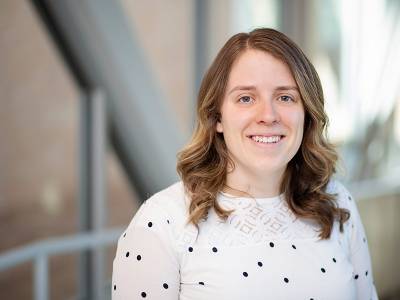 Christensen will receive a $10,000 cash stipend to advance her graduate studies. She earned a bachelor’s degree in biological engineering in 2017 and is currently working toward two advanced degrees: a master’s degree in environmental engineering and a PhD in Engineering Education. The Tremonton, Utah, native serves on the College of Engineering’s student leadership council and is an active member of Society of Women Engineers and Tau Beta Pi. People who work with Christensen say the recognition is well deserved.

“Darcie is a stellar student, scholar and researcher, and she has certainly earned the awards and recognitions she has received,” said Kristina Glaittli, a retention specialist in the College of Engineering. “However, her strengths do not end there. She is also a leader, an organizer, a problem solver and an innovator. I had the opportunity to see her in action when she was an Engineering Council member and a student ambassador. Whenever there was a challenging project, her colleagues would say, ‘Ask Darcie. She’ll figure it out.’ There was never a concern if Darcie was on the job. I consider it an honor and privilege to have worked with her.”

According to a press release from Tau Beta Pi, 329 students applied for the fellowships. Recipients were chosen based on a competitive criteria of high scholarship, campus leadership, service and a promise of future contribution to the engineering profession.

Christensen is part of the 85th group of fellowship awardees. Additional recipients are students at Massachusetts Institute of Technology, Berkeley, Yale, Vanderbilt and other prestigious schools.

Tau Beta Pi was founded at Lehigh University in 1885. It has collegiate chapters at 247 engineering colleges in the U.S. and active alumni chapters in 44 cities. It has initiated more than 590,000 members in its 133-year history and is the world’s largest engineering society. Tau Beta Pi says this latest round of fellowships represents a total of $7 million in awarded stipends.