News Release — Sept. 28, 2018 — It was the first round. Bjorn Ironsides was flitting around Hard Reset, a professional, at high speeds. People surrounding the arena covered their ears as chunks of metal went flying off of the 30-pound robot. And in one well-placed blow, the match was over in less than four minutes.

On Sept. 8, a team from Utah State University went to the 10th anniversary of SparkFun Autonomous Vehicle Competition, a battle bot competition, and took first place for university teams and third place in the overall national competition. This was the second year the USU team competed.

“I loved the experience we got from the competition,” said Will Clarke, one of Utah State University’s team members. “Discussing ideas and applying our engineering skills with all levels of teams was very exciting and fun.”

Robert Cowan, a long-time competitor and member of DSM Robotics, a professional team, told the USU students that they were the best college team he had seen in all his years of competition. Cowan’s bot, Crippling Depression, was a defending champion up until this year when Bjorn Ironsides defeated Crippling Depression. 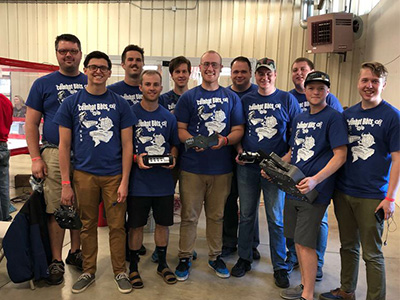 Alex Christensen, another Aggie team member, said their bot did better than expected for a first time bot and although it wasn’t perfect, it was a great experience.

“This experience helped me learn what it means to collaborate and work together with a group,” said team member Brad Dyer. “The combat bots we designed and built weren’t perfect, but the problems we faced opened my eyes to the challenges that face engineers in the industry every day.”