Oct. 12, 2017 – At age 17, Jixun Zhan left his small hometown to attend college in the capitol city of China’s Jiangxi province. At Nanchang University, the fledgling biochemist chose to study fermentation engineering — a discipline he admittedly knew very little about.

“I wasn’t exactly sure what I’d be doing, but everyone knows fermentation has to do with making bread and cheese and wine, so at least we’d have something to eat,” he quipped. 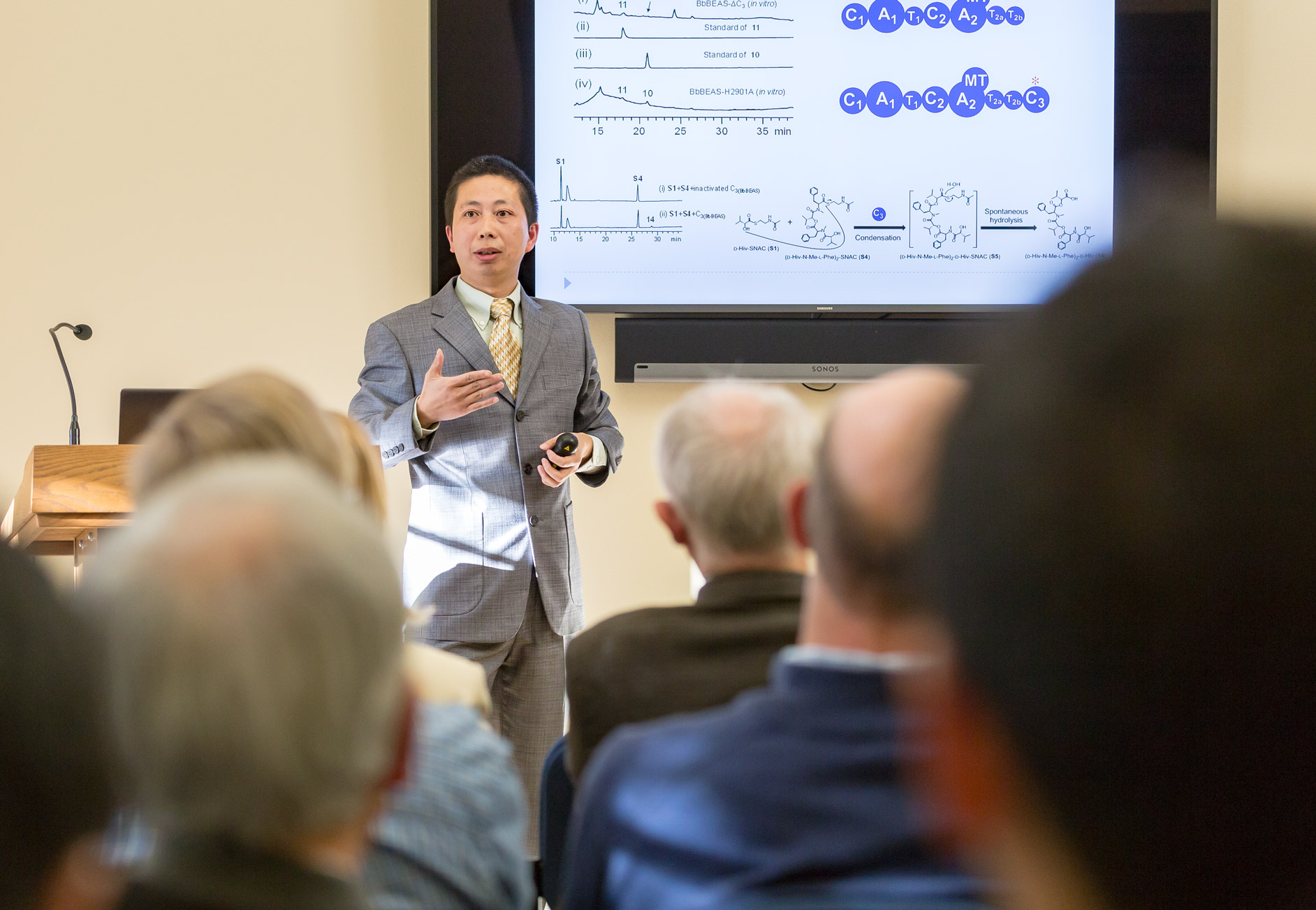 Today, Dr. Zhan is a leader in natural product chemistry — an emerging field that’s revolutionizing everything from food manufacturing to modern medicine. He and his team study the catalytic synthesis of natural products created by microorganisms including bacteria and fungi. Zhan has reproduced many bioactive compounds using engineered microbes. Most recently, his team biosynthesized beauvericin and bassianolide — natural compounds produced by the fungus Beauveria bassiana that have multiple beneficial health effects.

Zhan, who was recently promoted to professor of biological engineering at Utah State University, presented a snapshot of his ongoing research on Oct. 9 at his Inaugural Lecture entitled “Curiosity-Driven Exploration and Reprogramming of Nature’s Biyosynthetic Machinery.” The USU tradition that began in 2002, gives faculty who reach the highest level of academic tenure an opportunity to showcase their body of work to the USU president, provost, colleagues, family members and invited guests. 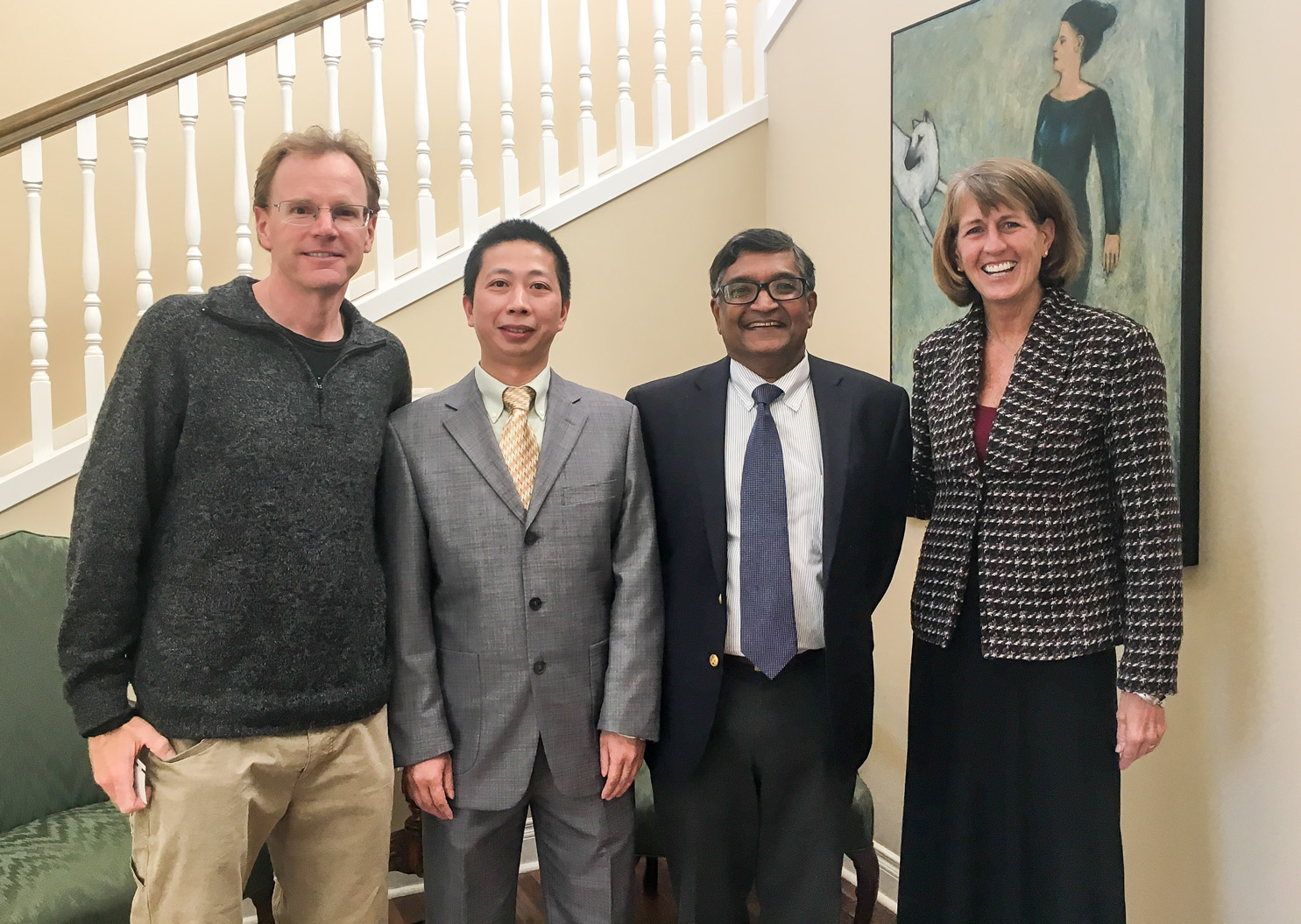 After graduating with a B.S., Zhan continued his M.S. study of fermentation engineering at Tianjin University of Science and Technology and later completed a PhD in natural products chemistry and biochemical engineering at East China University of Science and Technology and Peking University. He also completed post-doc training at UCLA and the University of Arizona where he studied fungi found in plants in the Sonoran Desert. His work led to the discovery of several important anti-cancer molecules and set him on a path to becoming a leading expert in combinatorial biosynthesis.

In 2008, Zhan joined USU’s Department of Biological Engineering where operates the state-of-the-art Metabolic Engineering and Metabolic Analysis labs. In 2015 he received his third grant from the American Heart Association for his work using microbes to synthesize resveratrol — a type of natural phenol found in the skin of grapes, blueberries, raspberries and peanuts —that has been shown to have cardioprotective, anti-inflammatory, anti-cancer and other health-promoting properties.

Zhan has published five book chapters and 89 peer-reviewed papers in many prestigious journals including Nature Communications and the Proceedings of the National Academy of Sciences, USA. He also holds a U.S. patent.

Zhan lives in Logan with his wife, Ella, and three children. When he’s not in the lab or classroom, Zhan enjoys soccer, watching TV and spending time with his family.