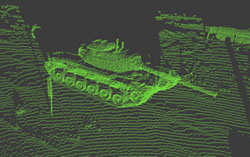 Ladar, or Laser Detection and Ranging, uses light waves in the form of a laser beam, unlike traditional radar, which uses radio waves, to measure the range (distance) to an object. It does this by determining the time it takes for a laser pulse to hit a surface, reflect, and return to the sensor.

One characteristic of laser beams is that they are very concentrated, keeping the diameter of the beam small for long distances. It is this characteristic which makes a laser ideal for generating a high-resolution, long-distance “image,” where each measurement of distance is like a pixel in a 2D digital image. A common name for such a distance image is a “point cloud,” because each measurement describes a point in space (azimuth, elevation, and distance). An example of a point cloud is given in Figure 1. 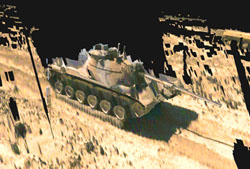 One of the major innovations CAIL's work has produced is the fusion of digital imagery with ladar point clouds, patented by Dr. Pack and USU. It involves simultaneous acquisition of ladar distance measurements and digital imagery. For each ladar “shot” (measurement), the digital camera acquires a patch of image pixels from the same location in the scene.

The 3D image is very similar to images produced using computer graphics, where a wire-frame model of an object is created and then the facets of the model are painted with textures to create a realistic 3D scene. These textures are commonly called texels in computer graphics. Since the 3D images produced using CAIL's technology are similar, the new 3D camera is called a Texel Camera™. The texel image corresponding to Figure 1 is given in Figure 2.

One of the advantages of 3D texel images is that the synchronized nature of the ladar and digital image data allows for error-free use in dynamic situations, where the texel camera, the scene, or both are moving. This capability has generated interest in many areas of research, including cruise missile targeting applications, airborne mapping of coastal topography, and possible unmanned aerial vehicle (UAV) texel cameras for both reconnaissance and city mapping. 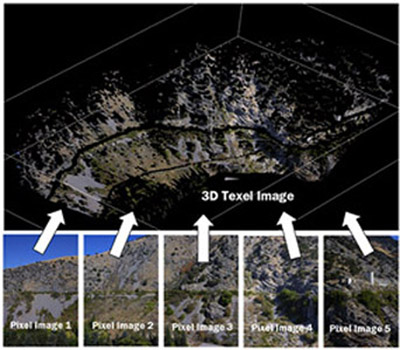 If several texel images of a scene are captured from different perspectives, the images can be combined to produce full 3D images. An example of the power of this capability is shown in Figure 3, which is a texel image of the road at the mouth of Logan Canyon near USU. As can be seen in the Figure, the combination of five texel images into a single mosaic allows identification of features that can't be detected from just the 2D digital images alone. Note the shape of the hillside and the route of the canal visible in the texel image. Although it appears that the image was captured from a birds-eye view, the texel camera used to capture the images was located at a single spot on the ground, across the canyon from the hillside.

By instantly "stitching" the ladar measurements (up to 20,000 ladar shots per second) and digital images together, there is a faster acquisition of 3D color imagery. This fast image aquisition allows for real-time image viewing and analysis. We are the only ones who can view and QC data in the field. We can also provide instantaneous earth coordinates for any object, which is important in tactical military operations and land development.

Another use of the texel camera technology is in space-based applications. Recent interest in inspecting the Space Shuttle after launch has prompted NASA to consider the use of a texel camera on the end of the robotic arm to inspect for damage to the heat-shielding tiles. The texel camera is ideal for this purpose, because the 3D images allow for detection of damage through both surface shape analysis and by color image inspection. Texel technology eliminates motion blur, which is normally a problem, since the inspection requires the camera to be in constant motion. Interest has also been shown by NASA in using texel cameras, combined with sophisticated control algorithms, to guide unmanned space vehicles to locate, dock with, and service the ailing Hubble Telescope.

CAIL is also involved in applications and development of ladar imagers. A research project recently awarded to the Space Dynamics Laboratory (SDL) at USU will allow CAIL and SDL to build a highly capable world-class ladar system, integrated into an entire sensor suite, providing texel camera capability. This project will allow faculty and students to develop a working knowledge of sophisticated ladar systems, and will provide unique data for development of signal processing algorithms to exploit that data.