This document describes the implementation and successful demonstration of a handheld mobile Texel Camera by the Center for Advanced Imaging Ladar (CAIL). A proof of concept demonstration which generated textured three dimensional models using the Canesta flash Lidar development system and a Micron CMOS camera development board has led to an integrated prototype.

The flash Lidar sensor used was developed and manufactured by a company called Canesta. It is a CMOS chip which is capable of resolving range information from a modulated Laser source. The sensor we used contains 64 by 64 pixel elements meaning that it generates a 64 x 64 range image simultaneous at multiple frames per second. Canesta now manufactures a higher resolution sensor which also has better range resolution. A short non-technical description of their sensor is included in the appendix.

The CMOS sensor used is manufactured by Micron Technologies. It is a 1280 x 1024 CMOS image sensor packaged into a standalone development board. This sensor is not unique in that various alternate sensors could be used to satisfy the requirement.

In order to prove the feasibility of this idea and to demonstrate the concept, a proof of concept experiment was designed. The Canesta development kit was used to capture the point cloud for some boxes that were placed against a textured wall. The CMOS camera was then set up so that its nodal point coincided with the nodal point of the Canesta camera in the previous experiment and visual imagery was obtained. The visual texture data was then warped and mapped onto the 3D point cloud. This demonstration produced results that would be similar to having the two cameras co-aligned and co-boresighted and images captured simultaneously. The resulting 3D model was rendered in VRML and can be displayed in any browser with a VRML plug-in. Figure 1 below shows a couple of screenshots from the VRML browser. 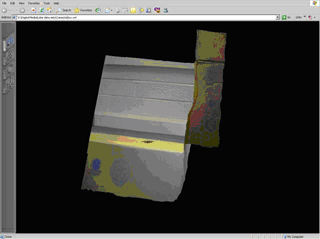 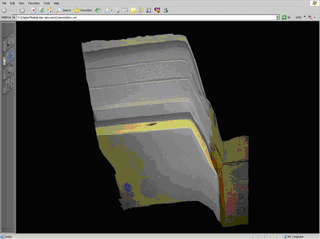 Based on the successful demonstration of technology, a prototype design was initiated. The desire was to have a complete integrated unit which would incorporate the Canesta camera and the CMOS camera. The two cameras needed to be co-boresighted to eliminate any parallax issues as this is intended for fairly short range use. Some modifications were made to the Canesta development unit and a support structure was designed which would fix the two cameras together as well as hold the cold mirror used to co-align the cameras. The cameras are arranged so their nodal points coincide. Essentially the two cameras appear to be looking from the very same point of regard. Mechanical drawings for this design are shown in Figure 2. 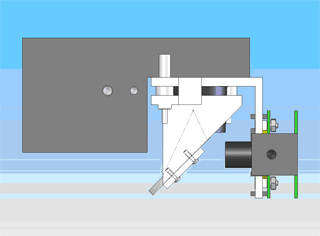 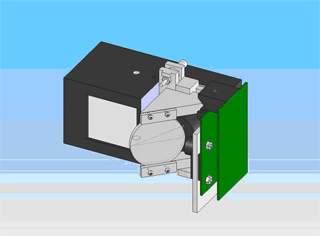 Operationally, the two cameras are co-boresighted and co-aligned. Three dimensional point cloud data will be captured by the Canesta camera while visual texture data will be captured simultaneously by the CMOS camera. Both cameras operate in a “snapshot” mode where all points and pixels are captured simultaneously. Software has been developed which controls the cameras and capture process. As all pixels are captured in a “flash” operation, multiple frames can be captured in rapid succession leading to the possibility of a “Texel video camera”. The prototype unit has been completed and implemented. Pictures of the unit are shown in Figure 3 below. 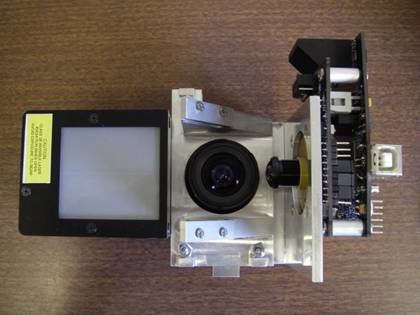 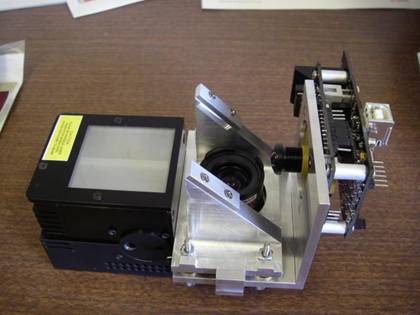 Based on the success of the proof of concept, and on the prototype implementation, design is beginning on a fully integrated handheld Texel camera. The implementation will take a bare Canesta sensor and a bare CMOS sensor and integrate them into a compact fully aligned and co-boresighted unit. The handheld can be used in a stationary mode where it successively images adjacent regions, but it is intended to be used in a more freeform mode where the user would snap 3D pictures while holding the camera. This process will generate a large number of “snapshots” and a very large amount of data, much of it redundant and overlapping. We are currently developing the algorithms and software which will enable point cloud matching and data weeding and filtering which will make it possible to generate fully integrated three dimensional models of objects and environments. With continued integration and development, the cost of these handheld Texel cameras will eventually fall to very low levels, making them suitable for consumer markets. This will open up new markets and revenue sources for the Texel camera technology.